Because I know you're all sitting on the edge of your seats when it comes to my writing projects, here are some quick updates.

My fantasy novel Broken Gods has been read through the Cooper Book Club, and I have a few pages of notes and many updates to make.  Some deal with smaller things, some deal with bigger parts of the story.  This by far the longest and most ambitious book I've written, so it doesn't surprise me that there are more things to consider and edits to make.  That is what I will be working on for a little while, editing until I feel happy enough with it to send out a round of query letters for it to literary agents.  One of my worries is the word count, which was already higher than it maybe should be at 124,000 words; after a bit of editing, it's now at 128,000.  We'll see if I try to cut it down before sending out queries.

I have three potential ideas as my next project, which will be my seventh novel.  Each of them is at least somewhat science fiction, with at least two of them having some fantasy as well.

The first involves two completely separate but connected realms, where one realm uses the other as a sort of gladiatorial arena.  Working title: The Timeless Shrine.

The second involves a militarist, global government who accidentally turns some of its own subjects into some sort of superhero (magic system still in development).  Working title: Emmers.

The third is more straight-up science fiction, and involves humans landing on a planet inhabited by the aliens that randomly show up in my earlier book, Spaceman Steve and the Quest for the Awesome Artifact.  One neat twist here (I think) is that one of the main point-of-view characters will be one of the aliens.  Working title: Lutis.

Still deciding which to move forward with at this point, but I hope to do something with all of these in time.
Posted by Joel at 9:23 AM No comments:

My most recent novel, Broken Gods, has had its first reader, my lovely wife.  It was received mostly positively, with some (constructive) criticism on a few things dealing with the end of the book.  I am now in the middle of a fairly big round of edits, reworking a few different things, and am fairly happy with how things are coming.  Once the edits are done, the wife will likely read it again before it gets sent to the exclusive Cooper Book Club.

The version my wife read was at 106,000 words, and after a bit of editing, the current manuscript is at nearly 116,000 words, and I still have a whole extra chapter to write for it.  With that chapter (putting the book at 48 total) and extra edits, I would guess I would end up around 120,000 words.  Much more than that and it starts getting to be considered too long for first time authors, and I'll have to look into cutting it down a little.  I'd likely cap it around 124,000.  So we'll see.

Other than that, life is not too exciting.  We are going on a road trip with my brother Erik and their family in June, travelling from the Grand Canyon up to Yellowstone, ending up in Colorado for a cousins get together.  It should be good fun.  The wife and I will quite possibly also be taking a trip somewhere else later in the year, possibly to San Diego.  There are also plans to go back to Europe in 2019, going up into Scotland, as our first trip there didn't get us any farther than Edinburgh.  We may visit London again as well.  But that's a while away.
Posted by Joel at 3:44 PM No comments:

I have been working quite a bit on my latest novel, Broken Gods, book one of the series The Path of Souls.  It is about to the point where my wife will read it and let me know what she thinks.  After editing based on her feedback, it will go to the esteemed Cooper Book Club.  In its current state, it is approximately 106,000 words, which is right in my initial goal range of 100,000 to 110,000.

This is certainly my most ambitious and complex book, but we shall see what people think of it when they read it.  It is epic fantasy with wizards and what I think and hope is a fairly original magic system.  It is written in third person past tense, which is a return to the style I used in my first couple books before doing three books in first person, mostly in present tense.  I have five point of view characters, and all thirty-eight of the chapters are from their points of view, with a few additional separate chapters (prologue, interludes, epilogue) that are from other points of view.

I'm really quite excited to see how this one is received.  I undoubtedly have quite a bit more work on it before it gets submitted to literary agents.

I already have notes on the book I will likely start writing after this one, with a very preliminary working title of Dice of the Divine, which would be an interesting mix of science fiction and fantasy.  But I won't start that one until Broken Gods gets submitted to agents.

In other writing news, I did have a small publisher respond to my query letter for Spaceman Steve and the Quest for the Awesome Artifact with a request for the full manuscript, which is actually the first time I've had that happen.  So that's exciting, no matter what comes from it.  They are currently reviewing the manuscript and will let me know within a couple months if they're going to do anything with it.  It's not overly likely, but I can hope. :)
Posted by Joel at 3:31 PM No comments:

The Path of Souls

Today has been a productive writing year.  Early in the year, I finished up work on Praeteran, my fourth novel.  That fantasy book is actually book one of a longer series that also includes my first novel, The Second Shadow.  I did not submit Praeteran to any literary agents, however, as I feel the entire series needs some more work.  I hope to get back to it some day.

In May, I started work my fifth book, which is the silliest thing I've ever written, which is a fantasy comedy novel called Spaceman Steve and the Quest for the Awesome Artifact.  It was the most fun I've had writing a book.  My little reading group (my wife and the Cooper Book Club) enjoyed it quite a bit.  I have submitted it to literary agents, but haven't gotten any further with it yet.  So we shall see. 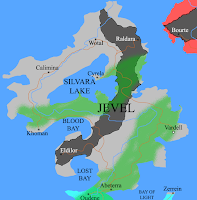 I have now started work on my sixth novel, which I believe is my most ambitious.  It started with a short story called The Screams, and has since expanded.  Before starting to actually write any more chapters, I spent quite a bit of time with world building, coming up with (what I think is) a somewhat unique magic system, and creating a storyline for a trilogy with both overarching plots that cover the whole trilogy, and smaller plots for each book.  By the end of my planning phase, I had seventeen pages of notes in Word, an Excel workbook with thirteen different worksheets, and a detailed map created in Photoshop (a fragment of which is shown here).  I then started writing, and am thus far on chapter 15 out of the outlined 53 chapters.  This book, currently titled Broken Gods (and part of the series titled The Path of Souls), is epic fantasy, and I hope to end up with book 1 being between 100,000 and 110,000 words, which would by far be the longest thing I've written.  I am trying to take things slower to allow more time for character and world development.  We'll see how the finishe
d product comes out.  Maybe it will get to the Cooper Book Club sometime in the spring.
Posted by Joel at 3:40 PM No comments:

Here is my third attempt at the five word writing challenge.  Just like in the past, I requested on Facebook that five friends each give me a word, and then I would use those five words in a piece of flash fiction (usually less than 1500 words).  This one is a bit different from the first two, and may be a little dumb, but I'm hoping it's at least somewhat amusing in the process.  And thus, I present to you One Busy Demon.

Here is my second attempt at the five word writing challenge.  Just like last time, I requested on Facebook that five friends each give me a word, and then I would use those five words in a piece of flash fiction (usually less than 1500 words).  And thus, I present to you the result of that attempt, Witch Doctor.


My vision starts to fade, and then…
Posted by Joel at 1:12 PM No comments:

This is my first attempt at the five word writing challenge.  I requested on Facebook that five friends each give me a word, and then I would use those five words in a piece of flash fiction (usually less than 1500 words).  And thus, I present to you the result of that attempt, Mallory.

What should the title of my current novel be?

The Man Behind the Madness

Joel
Forest Lake, Minnesota, United States
I am a database programmer north of Minneapolis, Minnesota. I have a good looking wife. Oh, and I'm weird. But God loves me, so it's all good.